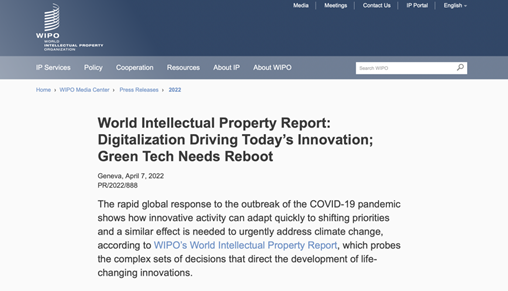 On April 7, WIPO released WorldIntellectual Property Report, reviewing the characteristics of thedevelopment of science and technology innovation during the period from the last century to present days and providing guidance to innovation development and protection under the background of the COVID-19 pandemic.

Currently in the 21st century, digitalization is the new big innovation revolution, as digital innovation quadrupled in the 20 years up to 2020, when it represented12% of all patent applications, with a 13% annual growth rate. Moreover, new technologies can be leveraged to achieve economic development at a large scale.By 2020, Japan-based innovators held 25% of the world's ICT-relatedpatents, followed by Republic of Korea with 18% and China, at 14%.

In addition, since the oil price shock in 1973, global innovation inlow-carbon emission technologies has growing by 6% annually until 2012, but green innovation has stagnated since then.