Improving the capacity to store electricity is playing a key role in the transition to clean energy technologies. Between 2005 and 2018, patenting activity in batteries and other electricity storage technologies grew at an average annual rate of 14% worldwide, four times faster than the average of all technology fields, according to a joint study published today by the European Patent Office (EPO) and the International Energy Agency (IEA).

The report, Innovation in batteries and electricity storage – a global analysis based on patent data, shows that batteries account for nearly 90% of all patenting activity in the area of electricity storage, and that the rise in innovation is chiefly driven by advances in rechargeable lithium-ion batteries used in consumer electronic devices and electric cars. Electric mobility in particular is fostering the development of new lithium-ion chemistries aimed at improving power output, durability, charge/discharge speed and recyclability. Technological progress is also being fuelled by the need to integrate larger quantities of renewable energy such as wind and solar power into electricity networks. 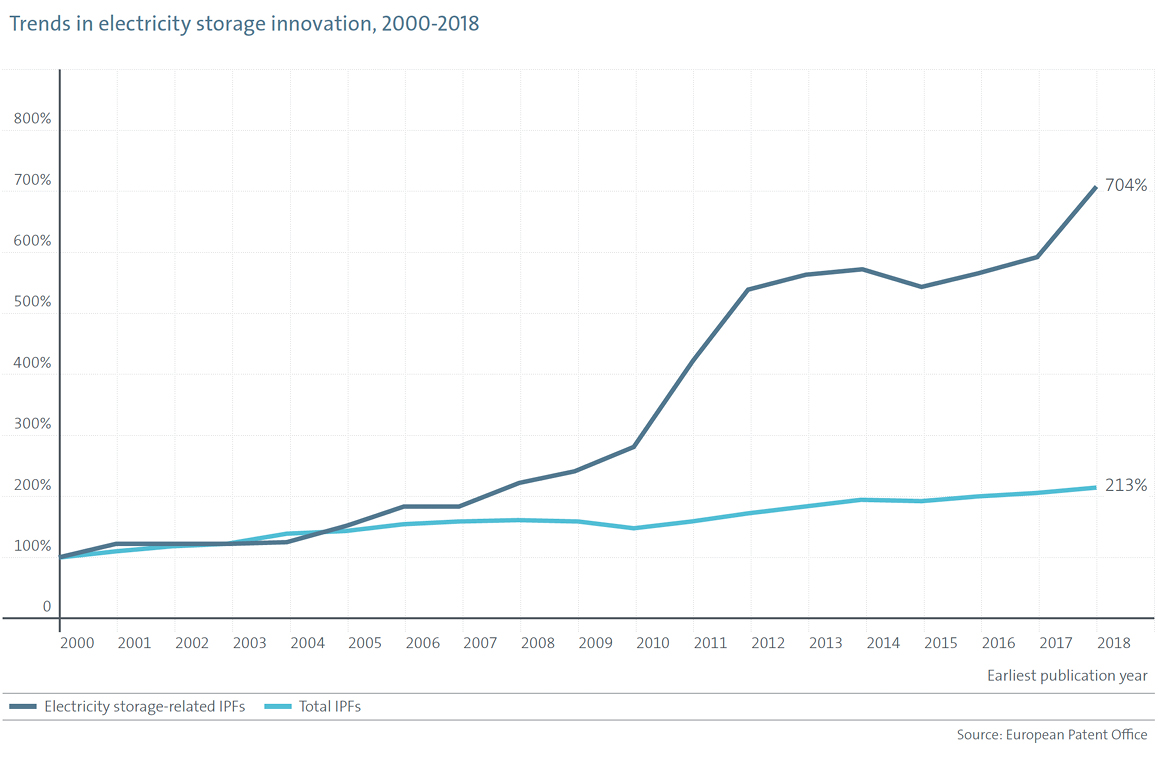 The study also shows that Japan and South Korea have established a strong lead in battery technology globally, and that technical progress and mass production in an increasingly mature industry have led to a significant drop in battery prices in recent years – by nearly 90% since 2010 in the case of Li-ion batteries for electric vehicles, and by around two-thirds over the same period for stationary applications, including electricity grid management.

Developing better and cheaper electricity storage is a major challenge for the future: According to the IEA’s Sustainable Development Scenario, for the world to meet climate and sustainable energy goals, close to 10 000 gigawatt-hours of batteries and other forms of energy storage will be required worldwide by 2040 – 50 times the size of the current market.

“Electricity storage technology is critical when it comes to meeting the demand for electric mobility and achieving the shift towards renewable energy that is needed if we are to mitigate climate change,” said EPO President António Campinos. “The rapid and sustained rise in electricity storage innovation shows that inventors and businesses are tackling the challenge of the energy transition. The patent data reveals that while Asia has a strong lead in this strategic industry, the US and Europe can count on a rich innovation ecosystem, including a large number of SMEs and research institutions, to help them stay in the race for the next generation of batteries.”

“IEA projections make it clear that energy storage will need to grow exponentially in the coming decades to enable the world to meet international climate and sustainable energy goals. Accelerated innovation will be essential for achieving that growth,” said IEA Executive Director Fatih Birol. “By combining the complementary strengths of the IEA and the EPO, this report sheds new light on today’s innovation trends to help governments and businesses make smart decisions for our energy future.” The report presents the major trends in electricity storage innovation between 2000 and 2018, measured in terms of international patent families (IPFs), each of which represents a high-value invention for which patent applications have been filed at two or more patent offices worldwide. As patent applications are filed many months, or even years, before products appear on the market, they are often seen as an early indicator of future technology trends.

Since 2000, businesses around the globe have filed more than 65 000 IPFs in the area of electricity storage. The annual number of IPFs has risen steeply, from around 1 500 in 2005 to over 7 000 in 2018. With an average annual growth rate of 14% since 2005, this increase has considerably outpaced the average yearly increase in all technology fields combined over the same period (3.5%).

Between 2000 and 2018, inventions in batteries accounted for nine out of ten electricity storage patents, far outweighing electrical (9%), thermal (5%) and mechanical (3%) electricity storage solutions. Moreover, batteries was the only area to continue to show a strong upward trend in recent years, reaching a new high in 2018, and underlining its dominant position in the electricity storage innovation landscape.

The report finds that lithium-ion (Li-ion) technology, dominant in portable electronics and electric vehicles, has fuelled most of the battery innovation since 2005. In 2018, advances in Li-ion cells were responsible for 45% of patenting activity related to battery cells, compared with just 7% for cells based on other chemistries.

The report also shows that patenting activity in the manufacturing of battery cells and cell-related engineering developments has grown threefold over the last decade. These two fields together accounted for nearly half (47%) of all patenting activity related to battery cells in 2018, a clear indication of the maturity of the industry and the strategic importance of developing efficient mass production.

In addition, other storage technologies, such as supercapacitors and redox flow batteries, are also rapidly emerging with the potential to address some of the weaknesses of Li-ion batteries.

Asian companies in the lead

The study shows that firms from Asia have a clear lead in the global race for battery technology, with Japanese and South Korean companies at the forefront. Asian companies account for nine of the top ten global applicants for patents related to batteries, and for two-thirds of the top 25, which also includes six firms from Europe and two from the US. The top five applicants (Samsung, Panasonic, LG, Toyota and Bosch) together generated over a quarter of all IPFs between 2000 and 2018. While innovation in battery technology is still largely concentrated in a limited group of very large companies, in the US and Europe, smaller companies, universities and public research organisations also play a significant role. For the US, SMEs account for 34.4% and universities/research organisations for 13.8% of IPFs filed. For Europe, the figures are 15.9% and 12.7% respectively, contrasting with Japan (3.4%/3.5%) and the Republic of Korea (4.6%/9.0%).