The legal battle between California-based designer Warren Lotas and Nike took an unexpected turn on Wednesday, when Lotas submitted a counterclaim against the sportswear company. In it, he argues that Nike's trademarks for its Dunk sneaker from 1985 are unenforceable.

Lotas found new levels of notoriety in the past year by selling Dunk lookalikes in familiar colorways borrowed from the Nike SB line. The shoes, which are not authorized by Nike, slightly alter the shape of the Nike SB Dunk by capping its Swoosh off with a Jason Voorhees-style mask. The latest of these is a "Pigeon" version made in collaboration with Jeff Staple that went up for pre-order in September. In October, Nike filed suit against Lotas in California, accusing him of selling "illegal fakes" of its designs.

In the counterclaim from this week, Lotas' lawyers say that Nike's trade dress, a type of intellectual property concerning a product's appearance, for the Dunk is invalid. Trade dress by definition cannot serve a functional purpose. The claim argues that certain elements of the Dunk that Nike is trying to protect, like its stitching and upper panels, are utilitarian and are thus "invalid and unenforceable as a matter of law."

Lotas posted about his counterclaim on his Instagram Stories on Thursday, writing that he's looking to have Nike's "supposed trade dress" invalidated. 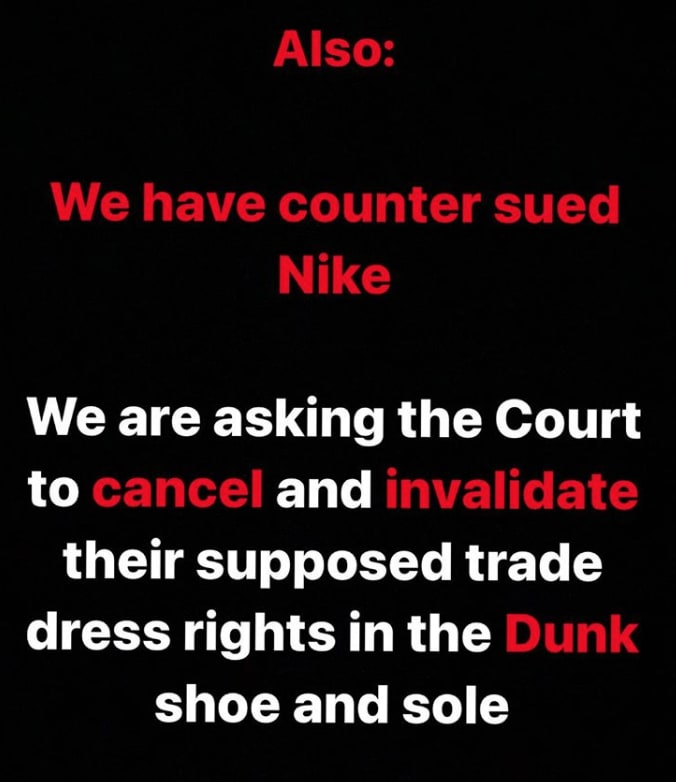 The designer speaks on his countersuit. Image via Warren Lotas on Instagram

When Nike sued Lotas in October, the designer responded on social media by saying that he would fight the claims and still fulfill all pre-orders despite the legal action. Nike sought to shut that fulfillment down by filing a preliminary injunction barring him from promoting, selling, or taking additional pre-orders for the shoes.

Lotas has since pivoted, posting an image of a new Dunk-esque shoe, this one without a prominent Swoosh on its upper, that he said he'd send to customers who bought the Pigeon collaboration instead. Nike responded in court, saying the new shoe still too closely resembles its SB Dunk.

The replacement sneaker from Lotas. Image via Warren Lotas on Instagram

In the filing from Wednesday, Lotas mentions his collaborator Staple, whose decades-deep portfolio of Nike work includes the original "Pigeon" SB Dunk from 2005. He says that since Staple, a Nike "collaborator and apparent agent," authorized the latest "Pigeon" Warren Lotas shoe, he had no reason to believe that Nike objected to his work.